Young Adult Fiction You Should be Reading Right Now 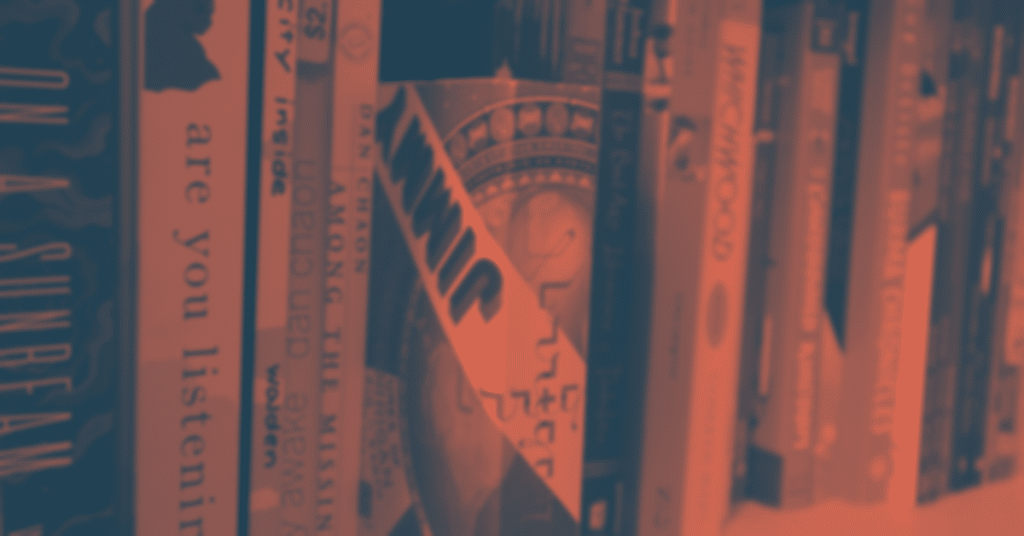 by beth and Laura

Lately we are hearing about a noticeable uptick in the sale of anti-racist books, particularly those by Black authors. As the MYAN team prepared to host anti-racism community calls with adults across Maine, we also drew in excerpts from many of the reputable authors whose works are flying off the (virtual) shelves. If you are responsible for one of those sales, great! Buy them, read them, learn from them. We would like to also encourage you to read some of the books included in this post – with a special plug to borrow from your local library!

Storytelling in literature is unique.

Stories in all forms are compelling, but something special happens in literature. Crafted by the author and brought to life in our minds, a novel requires us to imagine a different world, inhabit it through the experiences of the characters, and return with new eyes to our own life.
I (beth) have been thinking about the necessity of fiction and fellow MYAN staffer Laura has been kindly indulging me in conversation. We both read, a lot. Laura describes fiction as a “balm” in a world of constant news, finding novels better able to both convey the current events while also “sensitizing us again.”

Laura and I experience the world differently and, while I know that Laura’s truth and mine are unique to ourselves, I agree that when I travel into a novel’s world I am often surrounded by and wrestling with a myriad of feelings. The cultural humility and empathy we develop through literature noticeably impacts our engagement with others in the world. Without paying anything more than perhaps an overdue library fee, novels allow us to travel, explore, and immerse ourselves in experiences unlike our own. Laura describes this as “the fun part: choosing where to go and living in a different world for a while.” It makes sense why Laura is making time for fiction amid college course work, where content is primarily decided by (predominantly white) professors instead. Although there are no longer professors curating my reading queue, I think the fun part is ending up in an unexpected place and finding your way back.

Seeing ourselves in literature is important.

The incomparable Toni Morrison described writing her first novel to counter the “censure” in history and fictional works where she could not find herself. She wrote:

Literature has features that make it possible to experience the public without coercion and without submission. Literature refuses and disrupts passive or controlled consumption of the spectacle designed to nationalize identity in order to sell us products. Literature allows us—no, demands of us—to experience ourselves as multidimensional persons. And in so doing is far more necessary than it has ever been.

As a young person I also could not find myself in books, which is to say the intersectionality of the identities I did not yet have the language to name were either unwritten or remained hidden during my frequent trips to the local library. Still, I loved to read and, especially when I could not get back to the library fast enough, there were several stories that called me back to their worlds: The Outsiders (S.E. Hinton), Scorpions (Walter Dean Myers), and A Solitary Blue (Cynthia Voigt). They are classics, and they are still on the shelves in your local library to love and critique as my younger self once did.

I learned tremendously from the moral struggles of each character and about the cultures and environments in which they lived. Seeing others beyond stereotypes and tropes is uniquely possible in fictional stories. Elizabeth Acevedo, acclaimed author of Poet X and other YA Fiction works, describes being committed to countering  lack of representation by investing “in a character that is not a caricature, that is tender and ferocious pretty much across the board—typically a young woman of color, different than depictions that we have seen.” Using what Acevedo refers to as “everyday magic” to guide characters through their journeys, she hopes young readers will see that it could be them wielding the “everyday magic,” too.

To be clear, one story is not a whole culture – even a very good story cannot work that kind of magic. Rather, a good novel is a window through which we may look in to see just a small portion of the larger house. The reader must wrestle with the character’s perspectives for a better angle, a different view. British author Neil Gaiman argues that fiction guides us to better see others:

Prose fiction is something you build up from 26 letters and a handful of punctuation marks, and you, and you alone, using your imagination, create a world and people in it and look out through other eyes. You get to feel things, visit places and worlds you would never otherwise know. You learn that everyone else out there is a me, as well. You’re being someone else, and when you return to your own world, you’re going to be slightly changed.

Sometimes another’s story of ‘self’ echoes our own identities, representing an important validation and often combating the accompanying realities of systemic erasure in mainstream texts. Other times it is a fantasy escape from the adversities we experience in real life. And, many times, when we follow the author’s footsteps into a new world and explore characters’ triumphs and struggles unlike our own – we are consequently building a new, contextualized depth of emotional intelligence as we read. I tried to ask Laura about this idea, particularly relating to YA Fiction, and she reminded me that even the stories which seem outdated or less relevant to us now offer “a reflection of a lesson learned once upon a time [and] not to be forgotten.” (I promise, I asked Laura to write this whole piece. Insisted even.)

We must challenge what we read.

Fiction tricks us into learning this skill as we interrogate the virtues of a romantic interest who dumps our favorite character, wonder how adults can make such short-sighted choices when faced with conflict, and as our hearts break alongside those navigating consequences and tragedies. A history textbook might ask good guiding questions at the end of a section on the Vietnam War, encouraging reflection on US foreign policy motives. Reading along as Richie Perry navigates the war in Walter Dean Myers’ Fallen Angels cannot be matched though; Richie’s harrowing experiences, his questioning of the United States’ morality, and the inequities facing his family push the reader to think critically and empathically – regardless of whether we agree with Richie’s concluding thoughts.

In addition to challenging what we read, Nigerian author Eloghosa Osunde describes the power of changing endings by writing new ones: “Stories have, quite literally, kept me alive. The books that saved my life never stop mattering to me even when the world is falling apart. In fact, that’s when they matter the most.”

As adults we share a common obligation to YA Fiction and its target audience: to read it and better understand the rich diversity of youth in our lives; to share it and support young people’s development; to write it and tell the stories we wish had existed when we were seeking to be seen, to escape, to experience a world of our own making. Today your local library has so much more diversity of authorship and stories than when I was a budding teenager. Whether you are looking to grow your understanding of systemic racism, or just looking for a great summer read, consider (re)experiencing adolescence primarily through the eyes of Black characters.

Here are a few of Laura’s suggestions to get you started:

Borrow these for your own reading, gift to a teenager you know, fill the shelves of your classroom with them

Listen to these in the car with your teenager(s), download for the neurodiverse learner in your life

Here’s our full list of recommendations, organized by setting. Take a deep dive through the entire list with us, and then message us some additional recommendations:

A – available in Maine Libraries

NA – Not available in Maine Libraries

United States:
The Moon Within – Salazar Aida: A; B
All Boys Aren’t Blue – Geore M. Johnson: NA; B
King and the Dragonflies – Kacen Callender: NA; B
This Side of Home -Renee Watson: A; B
A Song Below Water – Bethany C. Morrow: A
The Hate You Give – Angie Thomas: A; B
So Done – Paula Chase: NA; B
Tiffany Sly Lives Here Now – Dana L. Davis: A; B
Dear Martin – Nic Stone: A; B
Piecing Me Together – Renee Watson: A; B
Solo – Kwame Alexander: A; B
Mare’s War – Tanita S. Davis:  A; B
American Street – Ibi Zoboi:  A; B
The Stars Beneath Our Feet – David Moore: A; B
Black Boy White School – Brian Walker: A; B
Calling My Name – Liara Tamani: A; B
Little and Lion – Brandy Colbert: A (with audio); B
Watch Us Rise – Renee Watson: A
All American Boys – Jason Reynolds: A (audio too); B
The Sun is Also a Star – Nicola Yoon: A; B
On the Come Up – Angie Thomas: A (audio too); B
The Voice in My Head – Dana L. Davis: A; B
Of Beetles and Angels – Mawi Asgedom: A; B
I’m not Dying with You Tonight – Gilly Segal & Kimberly Jones: NA; B
Clap When You Land – Elizabeth Acevedo: A; B
Charming as a Verb – Ben Philippe: A;
Poet X – Elizabeth Acevedo: A; B

Futuristic/Imaginary:
Pet – Akwaeke Emezi A; B
Black Girl Unlimited: The remarkable story of a teenage wizard – Echo Brown: A; B
The Belles – Dhonielle Clayton: A; B
Children of Blood and Bone – Tomi Adeyemi: A (audio); B
Kingdom of Souls – Rena Barron: A; B
Beasts Made of Night – Tochi Onyebuchi: A; B
Empty Monsters – Cat Hellisen: NA


West Africa (Nigeria, sierra Leone, Senegal, Mali):
War Girls -Tochi Onyebuchi: A; B
Taking Flight: From War Orphan to Star Ballerina – Michaela DePrincce:  A; B
Akata Witch – Nnedi Okarafor : A (only as audio book); B
Purple Hibiscus – Chimamanda Adichi A; B
So Long a Letter – Mariama Ba: NA; B
Mansa Musa and the Empire of Mali – Oliver P. James: NA
The Bride Price – Buchi Emecheta: A; B
Graceland – Chris Abani: A; B

South East Africa (Zimbabwe):
Zenzele: A Letter for My Daughter – J. Nozipo Maraire: NA; B
The Ear, the Eye, and the Arm – Nancy Farmer: A; B

East Africa (Ethiopia, Somalia, Sudan, Kenya):
Maps – Nuruddin Farah: A; B
Of Beetles and Angels – Mawi Asgedom: A; B
The Storyteller’s Beads – Jane Kurtz: A; B

Unknown/ambiguous:
Pinned – Sharon G. Flake: A; B
The Skin I’m In – Sharon G. Flake: A (and in large print); B
Opposite of Always – Justin A. Reynolds: A; B
Allegedly – Tiffany D. Jackson: A; B
Peas and Carrots – Tanita Davis: A; B
Who Put This Song On? – Morgan Parker: A; B
When You Were Everything – Ashley Woodfolk: NA; B