Juneteenth and the Black Student Caucus: Our space for unity

This Bridge Called My Back – Á la Black Student Caucus. Our space for unity.

Celebrations for Juneteenth are upon us while the US government and states across the country, including Maine, declared it an official holiday. While I [laura] have been a “Mainer” for four years and a “New Mainer” for two years prior to that, this will only be my second year observing and celebrating Juneteenth. Although Juneteenth is another marker of the commemoration of the emancipation proclamation (in 1863 as a reminder to some), its widespread acknowledgement has only been a recent one. Celebrating Juneteenth in Maine for the first time last year, I witnessed the beautiful youth-led “ Pop Out! Rally”. The gathering was organized by my fellow MYAN staffer, Christina, alongside other Black youth. Many attended in solidarity. They rallied to protest the incessant violence brought upon black bodies in the midst of the pandemic, accentuated by George Floyd’s death. 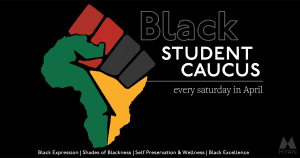 Whilst I did not learn through the education system about darker-skin folk who fought and are fighting for our (Black) liberation in the US, there are many Black youth leaders who juggle and balance a myriad of projects, and whose contributions will not be taught in classrooms again this year. Christina is one of those leaders who I am privileged to know. It is in spaces like the Black Student Caucus that we bridge the gaps that the education system creates and continues to reinforce through the current bills to restrict teaching children about critical race theory. This is my – and many others’ – testimony for what the Maine education curriculum teaches as “history”.

From August to April, Christina and I planned the Black Student Caucus (BSC). Young Black Mainers designed and held this month-long event for themselves. While reflecting, Christina described the Caucus and its future embodiments as “a place where we come together in spite of differences in views and hold raw conversations – both in preparation for the BSC and during. It was an awakening.” 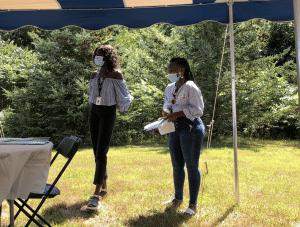 Black experiences in Maine are varied and unique. Yet there are connections we all feel.Christina and I, who appear as if polar opposites standing side by side, have experienced Maine differently. There is also overlap in our personal stories due to the layering of identities we do share.  This overlap amongst the variation, which seems paradoxical, is the core uniting essence of the BSC. I am called back to feelings I felt after reading This Bridge Called My Back for the first time. Echoes of joy, being overwhelmed, and the astonishment I had experienced through that writing came back to me in the virtual spaces of the BSC.

Like in the anthology, we had people from all walks of life who used a breadth of mediums to articulate their experiences; youth who were ready to jump into exploring all the nuances of these experiences while knowing how messy and difficult of a process it is. I believe no one could have prepared me for the plugs, the laughs, and the heavy silences we would hold. This felt like our own version of This Bridge Called My Back; it was our space for unity.

Throughout and beyond the Caucus, we have asked ourselves, what can or should our activism look like? Who has defined its parameters? We thought beyond those definitions that often serve as forms of gatekeeping to understand discourse as activism. All four sessions were designed by phenomenal young Black Mainers with the goal of connection, celebration, and deeper understanding in mind. Every time, we were called to manifest courage, vulnerability, and frankness in conversation. Every Saturday in April, we gathered to join with other young Black Mainers and move beyond our COVID entourages and local communities.

Each session was unique and required us to navigate and discuss how each of the topics directly related to the multitude of experiences of Black racial identity. We seemed to all seek guidance from William Cross’s Nigrescence theory (without explicitly citing this foundational work), as we lamented together on the rollercoaster of experience of being Black in predominantly white education institutions (PWI) or environments.  This action of courage and vulnerability–to be in dialogue–is not only a catalyst for social change but is in itself social change. To me, it seems like the “gillenial” culture has shied so far away from the norm of seeking to build close interpersonal relationships in our quotidian lives, even though we are supposedly in the age of connectivity. Unfortunately, it is now considered “revolutionary,” or at the very least a huge cultural change, to make the choice to engage vulnerably around peers. The Caucus gave us the opportunity to change this norm.  One student that attended the Caucus described its importance as:

“[b]eing able to have a safe space to try out a new name and being accepted with open arms. And then also having a space to discuss difficult topics and having the freedom to speak my truth and ask questions and have other people who have similar experiences, understand me or are willing to listen. It was very healing. ”

“Hope is not an emotion or optimism” — The intersections between the practice of hope and academia while Black.

The First Annual Black Student Caucus was an embodiment of what activist, organizer, and Professor Dr. Mariame Kaba calls “practicing hope”– not to do away with emotions like anger, frustration, or fear in exchange for hope, but to see hope as a discipline, something you practice. Kaba says that if we practice hope, we can believe in the possibility of transformation of the world and conditions we’re in. Having recently finished my undergraduate degree, I understand first-hand how isolated Black people can feel in formal education spaces, especially at PWIs.

Although isolation is felt in absences and violence in the curriculum as well as in the lack of representation, there are other ways this is experienced. Our Black bodies are additionally taxed through the sheer participation in most educational institutions in America due to their connection to other institutions that profit off Black people. For example, the institution that I attended for my undergraduate degree contracted its food services from a company that had directly invested in the prison industrial system by supplying dozens of prisons with food.

This is one truth. The other one that exists simultaneously is that this is reflective of a micro view of the shift in academia in general. Across disciplines in mainstream educational spaces there are countless Black queer women who are changing the scene. Spaces like the Black Student Caucus are essential in combating the moments of hopelessness we experience because they provide a place for our peers to take on supporting roles of which these institutions deprive us. Listening to each other showed us a way to overcome the hurdles of being the only Black people in our schools and the myriad possibilities that lie ahead. It allows us to practice hope, to see how tangible and attainable transformation can be because we hear the methods in which others like us have managed it. In these spaces, youth speak of paving a communal vision and hope in the face of shared struggles.

Black Up when no one meets your gaze. Sustaining the Black Imagination

Celebrating Juneteenth, for Christina and I, means reflecting and acknowledging those who came before us. It means learning from the ones who dared to demand what, at times, seemed unimaginable.  As a facilitator and participant in the Black Student Caucus, I got to witness this legacy of making space and demands. A legacy that we must acknowledge in order to fuel and sustain the Black imagination. My Caucus peers testified to all the ways in which they relentlessly fight to make space for both collective and unique Black experiences. Christina describes this practice as a way to pass down or up to each other how to show up in spaces not built to contain or help us flourish. 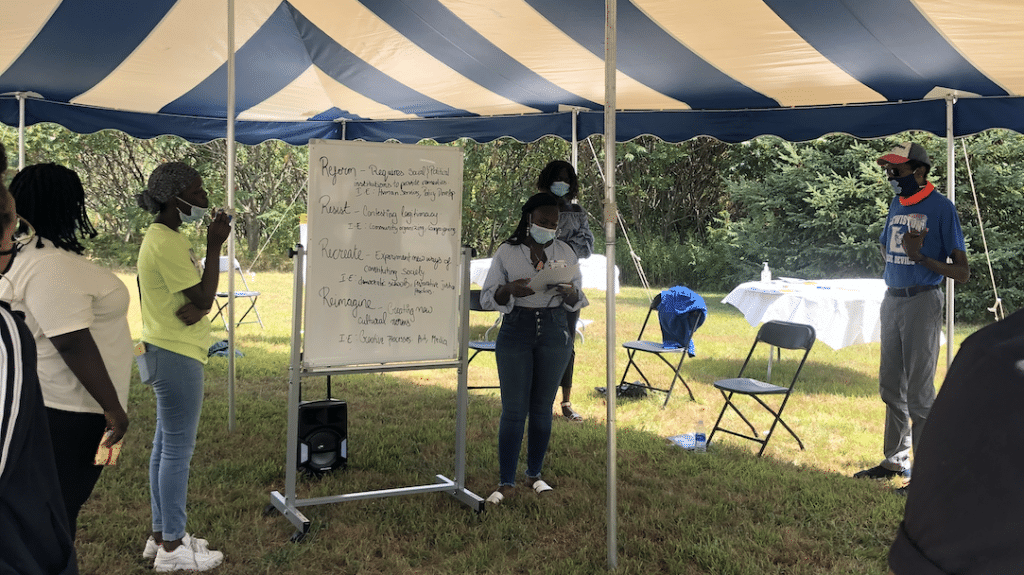 Thus, as we practice hope at the BSC, we also practice and discuss what Black Up looks like for us – when we are in the room that calls for it and when we aren’t. Our final speaker at the BSC, Moon Nyguany, introduced many of us to this concept. Black Up describes that very moment when someone says something that is completely, well, off the wall. It could be in the classroom, in the doctor’s office, at work. It begins in that moment when you look around the room for that one other Black person or ally, make eye contact and a mutual understanding passes between the two of you.  “Uhhh what just happened now? Did YEW catch that too?” It is that moment of contact and the choice you make afterwards. The choice is available to show up for yourself and or for all those who might not be present in that space, but are certainly affected.

Black Up is when we stand together to keep rebelling as the strikes keep rolling. Attending a BSC can be a way of performing Black Up. However, in the moments when our gaze does not find its Black Up, it is the stories we hear in the BSC of people’s radical imagination in similar situations that sustain us.

In our anti-Black society, the Black Imagination, ideas, ways of being, potentials for transformations, are intentionally suppressed in order to sustain the status quo. Charlene Carruthers, in Unapologetic: A Black, Queer, and Feminist Mandate for Radical Movements, talks about the ways that institutions direct and target the Black imagination. Her words resonate with me as we reflect on the moments shared and envisioned for our future:  “When someone rebels, an opposing force will strike back” (p. 27).

Christina and I reflect and thank those who laid the foundation to have spaces like the BSC be a reality. We equally – if not more so – look to each other and our peers for thanks, direction, and grounding as well. For those who do not experience the world in skin pigmented like ours, we ask not only how you perform Black Up year-round, but how in your connections, discourse activism – with kin and beyond – sustain the gratitude and movements of collective freedom past monumental times like this one.